Come along for the wild ride as writer Jay Rooke shares the trials and tribulations of hands-on parenting. It’s going to get messy and you won’t want to miss it.

Full-contact parenting. Being in the thick of the messy, authentic, barely-controlled chaos. Sharing the
humorous moments and humbling lessons learned. Reminding other parents that not one among us has their
sh*t together, and that’s okay. Actually, it’s hilarious. 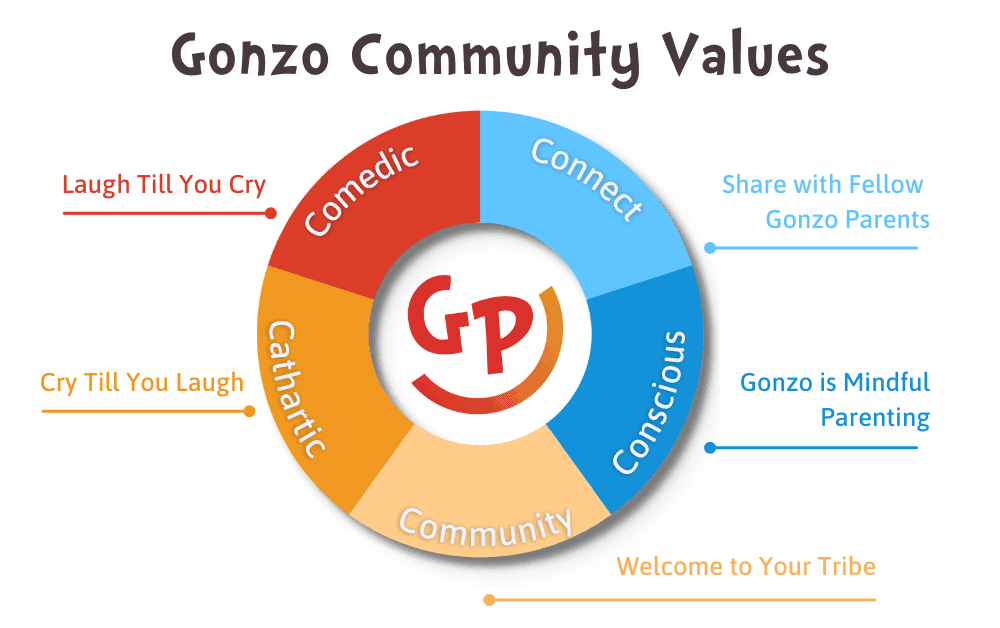 At Gonzo Parenting our mission is to ease the stress of day-to-day parenting by providing a space where parents can laugh, chat, gain tips & tricks, and share their authentic stories (the good, the bad, and the hilarious). To do this, we make sure all of our content shares a combination of our community values: Comedy, Connection, Consciousness, Community & Catharsis. Welcome to your tribe!
Learn More 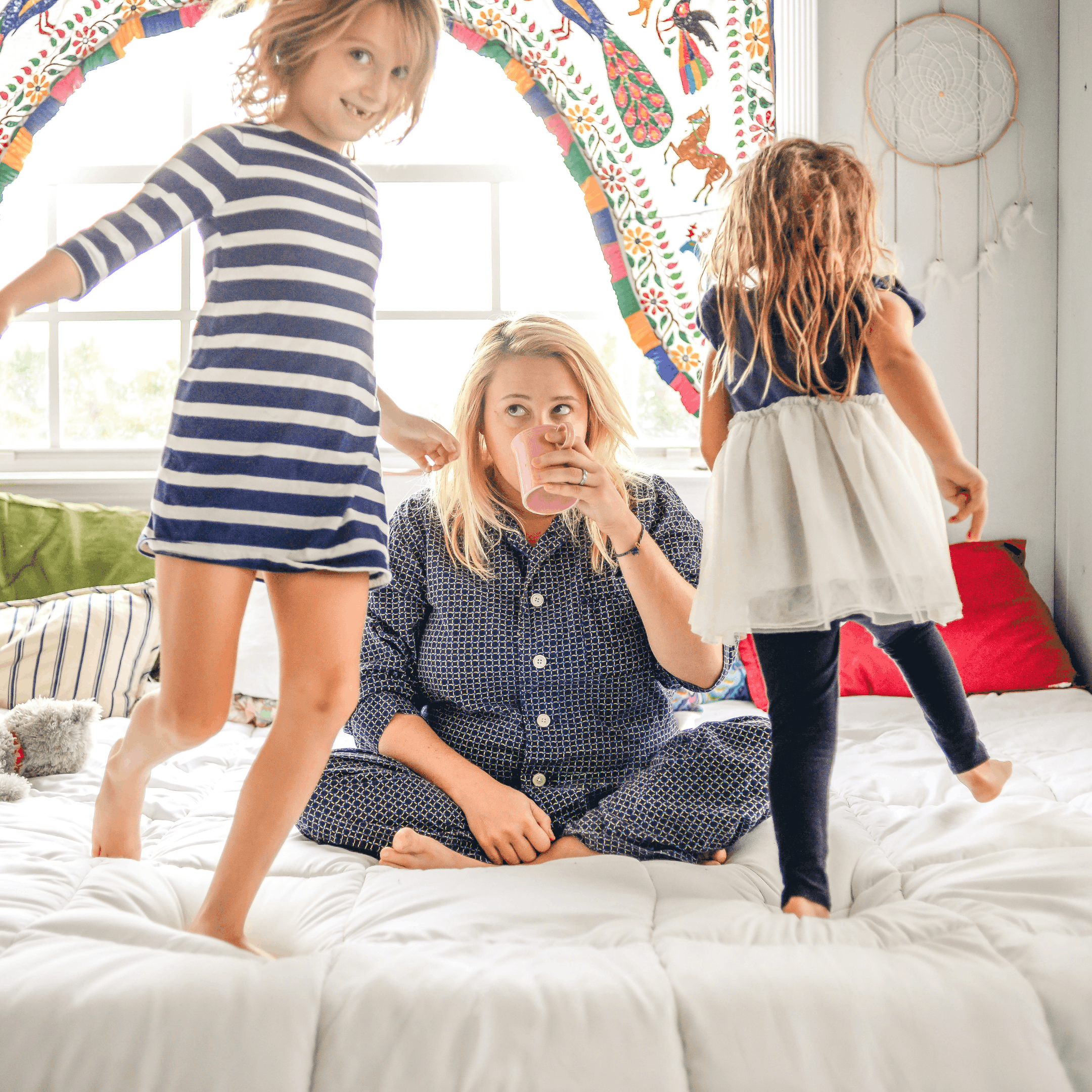 When you join the Gonzo Parenting Facebook Group you get… 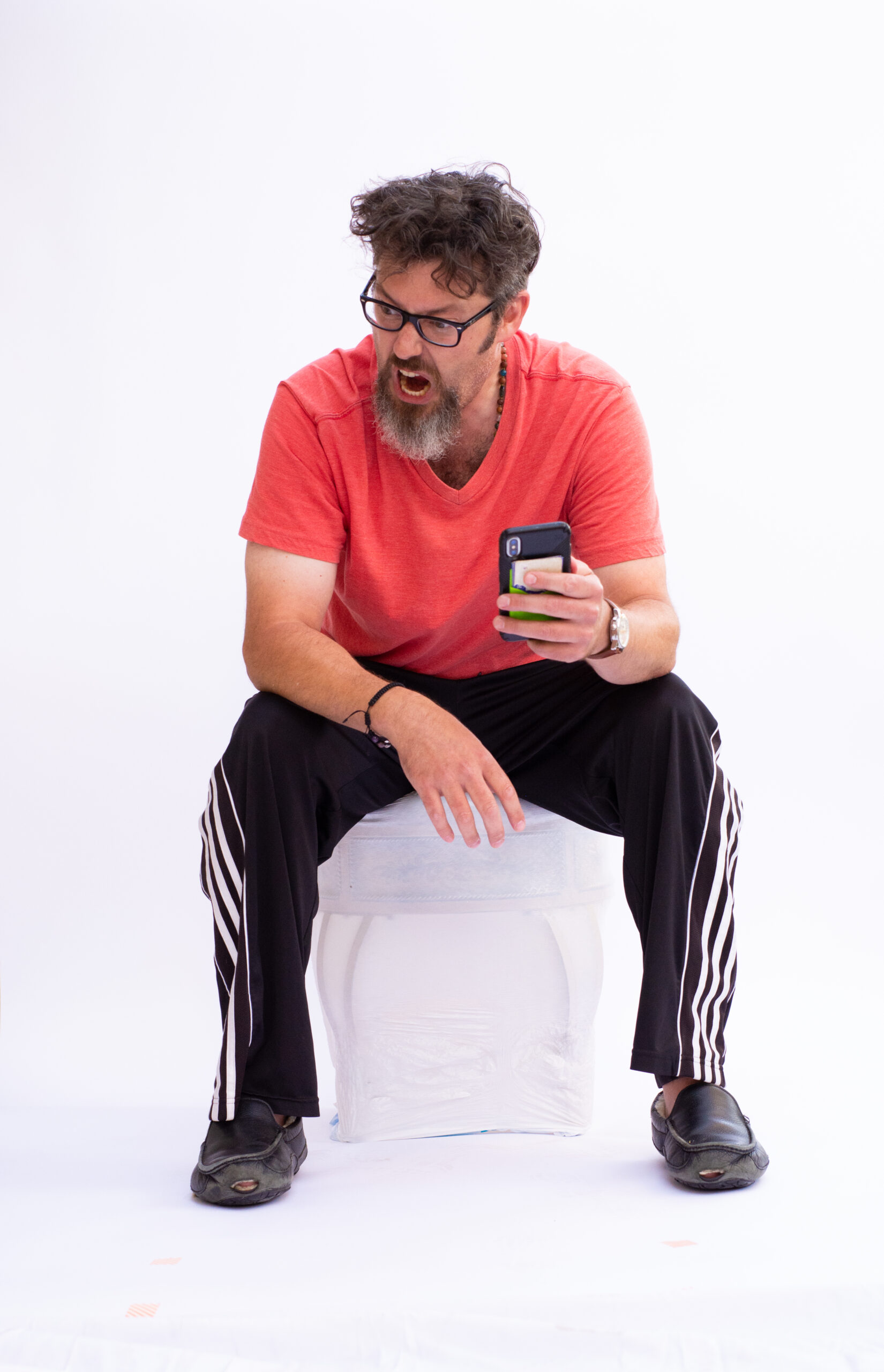 The Visionary Behind Gonzo Parenting

Jay Rooke, the founder of Gonzo Parenting, is a writer, healer, and mentor who seeks to provide a comedic, cathartic space for overwhelmed parents. By helping them laugh and heal through storytelling andcommunity, he empowers parents to raise children with love and start healing the planet. He tells deeply relatable stories about the “trials and tribulations” of modern-day parenthood to help others cope with the crazy through humor and empathy.

“Wow!!! Jay Rooke. The stories that are coming to light during this COVID crisis are UNFORGETTABLE!!! Consider the blessings my friend!”

“I love you so hard. And yes, I am completely laughing at your misery. But I hear you! It ain't pretty right now. Not pretty at all.”

“Oh gosh, thank you for sharing this. I laughed so hard, I’m surprised I didn’t wake up the child who was sleeping on me.” “Thanks for the best laugh I’ve had in many days! Not at your pain but at a great story! Kids - gotta love them!!”

“I shared this with two stressed out teachers who are also homeschooling their kids. Thank you for the laugh and hang in there!”

“I just peed a little laughing at this.”

“THIS needs to be in a podcast. I love so much that you shared this.”

“I’m sorry for your pain but dammit I laughed so hard at your misery!”

“What a visual! I was getting teary until the"punch" line and now my sides hurt from laughing. Intense parenting...I applaud you.”

In the Gonzo Parenting podcast, we invite real parents to share their authentic, hilarious stories that capture the shitshow of modern parenting, by reporting from the frontlines and telling it like it really is.

Our real-life parents will talk truth about parenting in a round table environment where they’ll discuss the hidden challenges of being a parent, talk about the things that perfect parents would never talk about, share their best parenting tips & tricks, and of course their most epic Gonzo Parenting moments.

All of our Gonzo Sponsors offer products or services to benefit those in our community. We encourage you to check out these AWESOME businesses, show some support and in return, you will not only have an enjoyable experience, but you’ll be helping us greatly in continuing our efforts. to build this community. 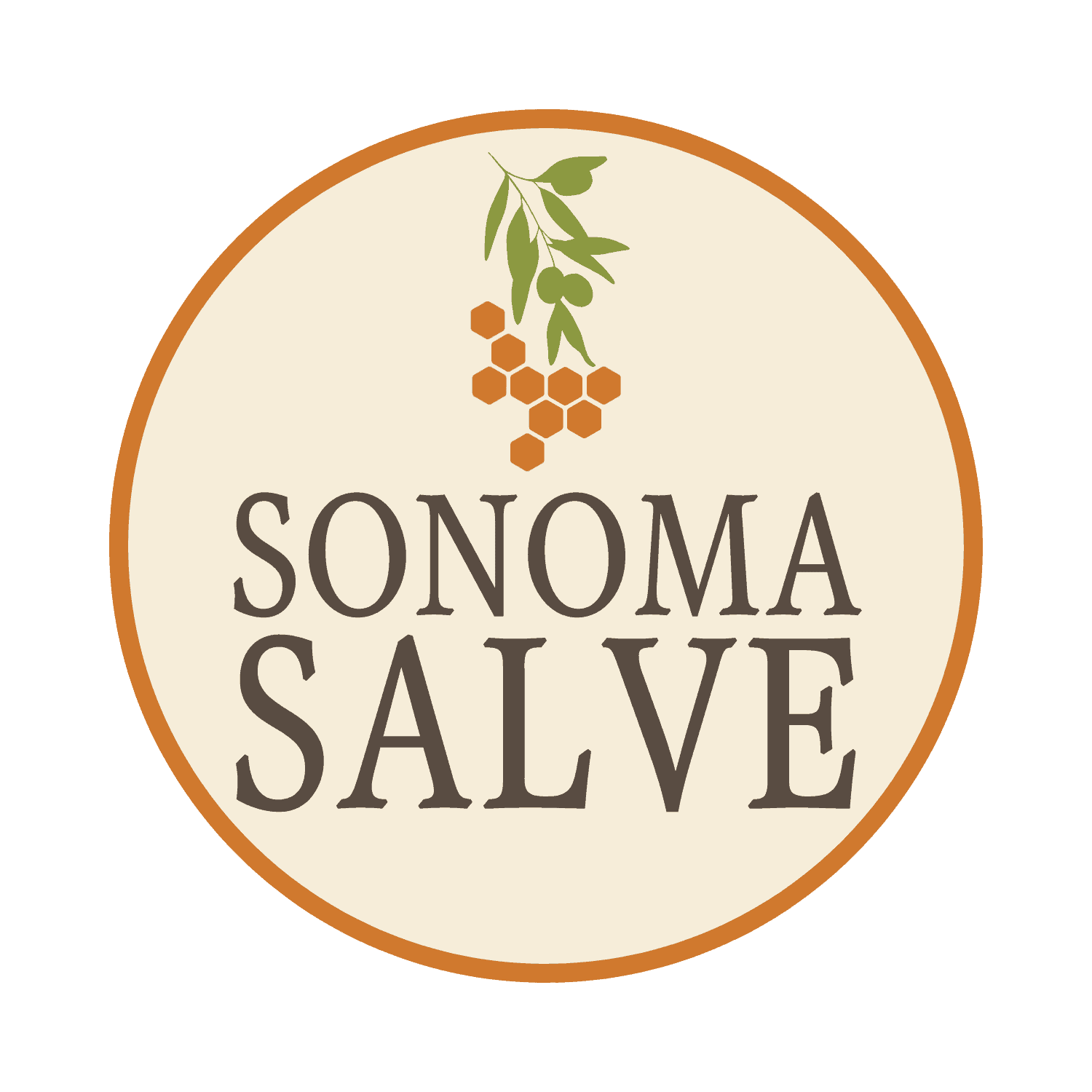 Sonoma Salve, funnily enough, was inspired by my children’s butts! Sonoma Salve Founder (also known as my wife, Alice Liddell) created the product to soothe the twins’ diaper rash. Sonoma Salve is also a freshly created small business, so the first batch is being offered at limited availability! Use code “GP20” to get 20% off your first order.
Check It Out

Let’s face it, when you’re a parent, everything hurts. Sometimes picking up your toddler is akin to competitive weight lifting. That’s why I recommend Dobson’s Choice CBD Pain Relief Balm for all of your aches and pains (only physical, we’ll have to recommend another product for your emotional pain later on). Make sure to use the code “Gonzo” at checkout to receive 15% off your purchase and free shipping. 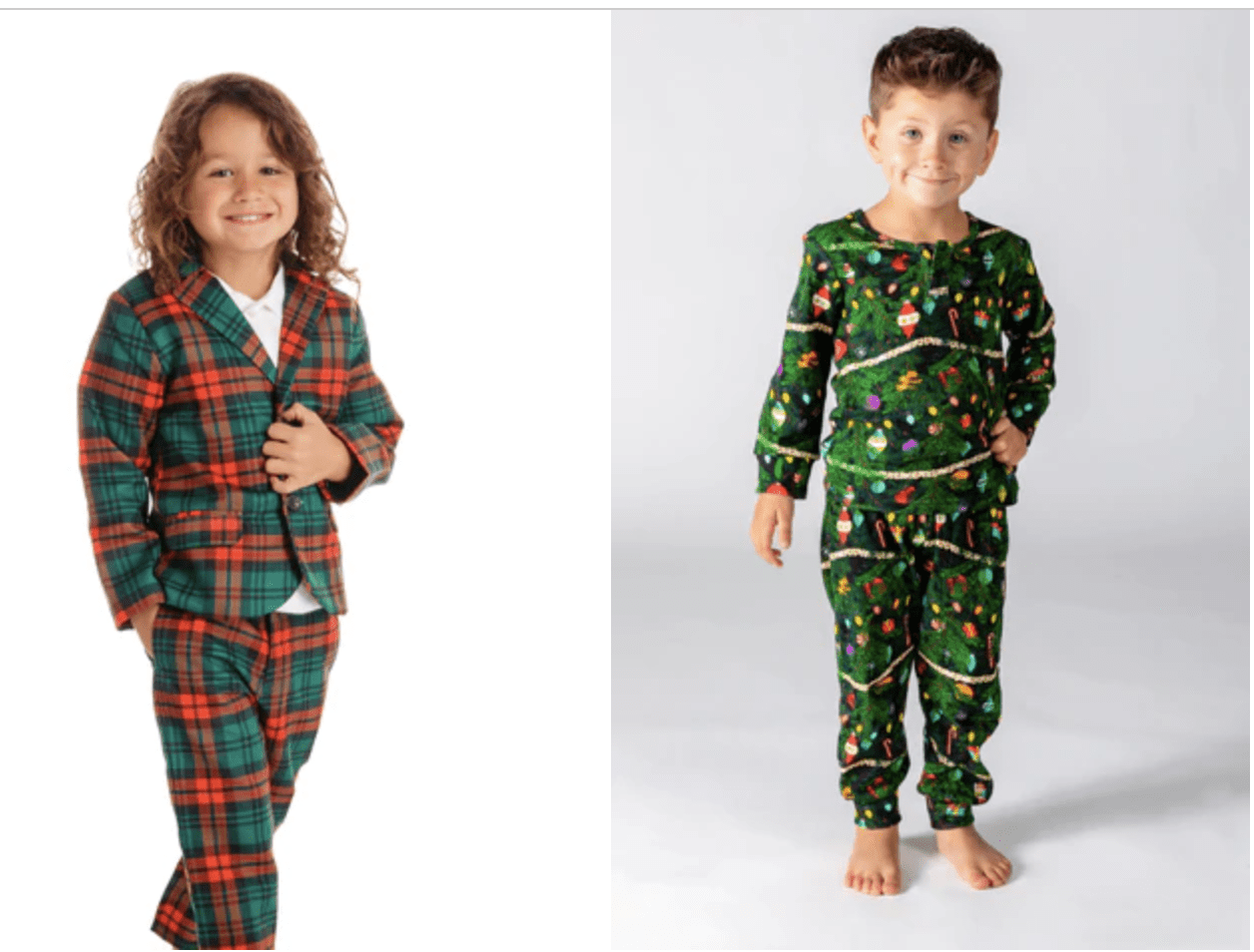 Get all your family matching pj’s holiday-inspired outfits, underwear and more from our partners at Shinesty! Just head to this link: https://glnk.io/yrp9/gonzoparenting And be sure to use the code GONZO at checkout for some dollars off your purchase! And this part is MANDATORY… be sure to post your funny family photo in the group to show us what you got.

My life took a lot of odd twists and turns to get here, but at the time of that photo, I was working as a correctional officer as a summer job in a local prison. Since then, I became a lawyer, went to culinary school, opened (and closed) a restaurant, moved cross-country to California, and, most notably, became the father of boy/girl twins.

One day during the toddler years, when all hell was breaking loose and I was nearing losing my mind, it somehow hit a stored stress memory and I thought back to my prison days. Shortly after, this top ten list was birthed 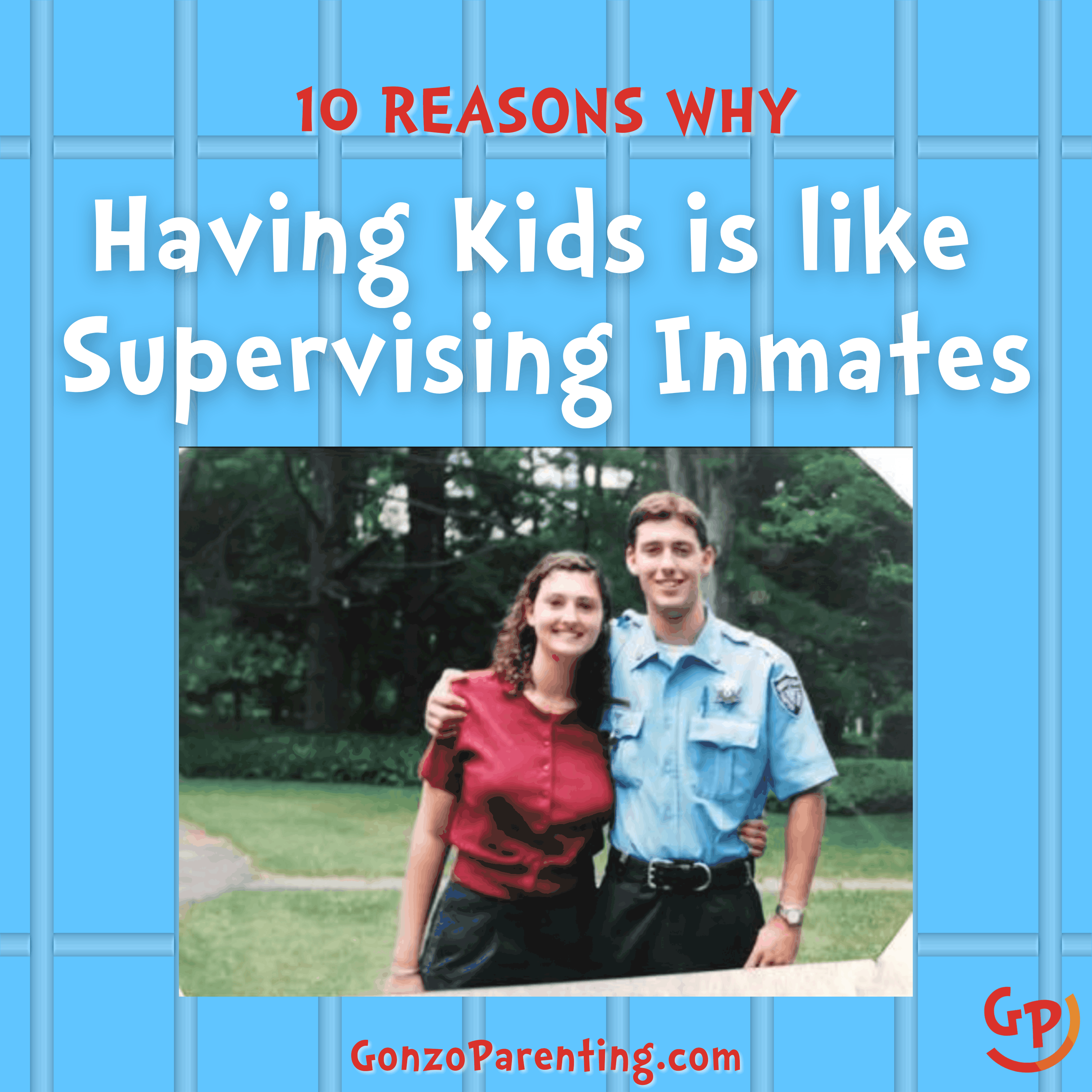 Gonzo Parenting—The Comic Book is currently at the publishers!

Want to be the first to learn about updates and launch dates?